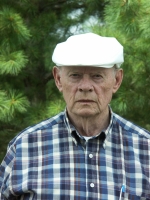 I was born in Cedar Rapids, Iowa March 3, 1930 and spent my youth there, in North Liberty and in Iowa City. While in my teens, I spent five years in the Moose sponsored Iowa City Drum and Bugle Corp. That participation made Navy Boot Camp rather easy when I joined in 1947. I attended Naval Submarine School in 1948 and married the former Darlene Venzke of near Kalona, Iowa in Yuma, AR. This union produced four children: Steven, Cynthia (deceased), John and Brian. There after I spent all of my Naval Service in the submarine service, except for periods of instruction. I completed two years of college via night school at the Waukegan branch of the University of Illinois and correspondence courses while at sea. I was a first class Engineman until I changed my rating to Electronics technician where I was promoted to Chief Electronics Technician in 1959. In 1960 I was selected for Limited Duty Officer, Electronics as Ensign, USN. I was then assigned to a one year Electronics School for officers. Next, I was assigned as Electronics Division Officer on the submarine tender, USS Orion repairing gear on submarines in port. I later applied for a one year course in applied electronics at the Naval Postgraduate School, (USNPGS) Monterey, CA. From the Orion, I was then assigned to the submarine USS Runner SS476 until transferring to USNPGS in December 1964. After attaining my BS degree, I was under a PG course for computer applications in electronics whereupon I was assigned to Commander Submarine Force, Atlantic Fleet as Assistant Communications Officer. I was involved in the search for the lost USS Scorpion SSN589. I was Planning to settle in CA after retirement, where upon, I received an assignment as Director, Communications Department, Naval Supply Center, Oakland, CA as the Vietnam War continued. I retired from the naval service in 1971 as a Lieutenant Commander after 24 years continuous duty. I returned to my home state of Iowa to build a house near Grinnell, IA. We made a great choice to be in a town with an outstanding college. After completing the house, I worked at the Federal Home Loan Bank in Des Moines until 1979 when I retired again. My hobbies included metal working, Bonsai, lapidary making jewelry, making stained glass windows, and oil painting. My work continues on family genealogy which began in 1982. I subsequently belonged to various patriotic, genealogical, historic and lineage societies. I am most proud to be a member of the Iowa Society, Sons of the American Revolution, and the Jamestown Society. Darlene and I moved into a condo in town (Grinnell) in 2006 as the aging process continued its insidious work.